Private equity firms’ appetite for e-commerce has risen since the beginning of 2016, with PE funds now accounting for 15 per cent of transactions. Financial buyers are also paying increasingly more for their acquisitions, as demonstrated by deals such as Silver Lake Partners’ buyout of Zoopla for $3 billion at 26.4x EBITDA.

Ralph Hübner, sector principal, Hampleton Partners, said: “Both retailers and digital marketers are battling for consumers in an Amazon world. Amazon is both a giant competitor and a ‘frenemy’, creating opportunities for thousands of other companies to run successful e-commerce businesses by using Amazon advertising and services.”

Amazon Advertising had a momentous year and is now estimated to be the third-largest ad seller in the US behind Google and Facebook, holding a 4 per cent market share. The value of its ad business topped $2 billion for the first time in Q1 2018, reaching $2,8 billion in Q3 and recorded continued triple-digit growth year-on-year.

Ralph Hübner continued: “Meanwhile, the e-commerce start-up ecosystem is undergoing major transformations. On the one hand, for established e-commerce platforms, funding value is increasing: in November, the Korean e-commerce giant Coupang raised $2 billion, followed by Indonesian leader Tokopedia’s Series G round in December, which resulted in $1.1 billion investment from Alibaba and the Vision Fund.

“On the other hand, it is becoming noticeably difficult for start-ups to obtain early-stage capital without guaranteeing their ability to disrupt a specific vertical through a serious data-driven platform.”

As for the digital marketing sector, total disclosed transaction value achieved $10.91 billion in the second half of 2018, more than double the first half value, due to two mega-deals: Adobe’s acquisition of Marketo at nearly 15x EV/S and Interpublic Group’s acquisition of Acxiom.

Other key trends in e-commerce and digital marketing

Personalisation and the post-purchase journey: As the number of retail casualties and the cost of customer acquisition continue to rise, brand-building and a satisfying post-purchase journey become crucial for customer retention. Personalised messaging is a core component of that journey as retailers seek to build customer loyalty.

Next-generation communication and innovation: the introduction of voice search, smart home devices, AR/VR is changing how customers can interact with brands and acquire goods and services. Artificial Intelligence (AI) is being used in search or filter functions, for data mining and content creation.

The future of e-commerce and digital marketing M&A

Ralph Hübner concluded: “E-commerce is set to be the biggest sales channel in the world by 2021, reaching an estimated $3 trillion in value.

“We are likely to witness more activity from strategic buyers keen to consolidate their offering and operations with next-generation technology and marketing software; and from venture and funding arms keen to capitalise on e-commerce start-ups with the potential to disrupt a unique vertical.” 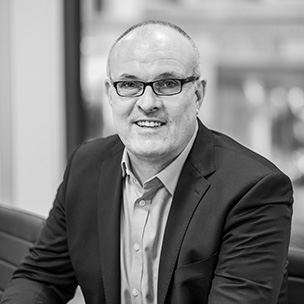 Axel Brill is based in northern Germany and has over 25 years' experience in the software industry. Axel co-founded Hoffmann Datentechnik in the late '80s and as its CEO built it out to become Germany's leading workforce management (WFM) solution provider for the retail sector. He sold the company in 2006 to Torex PLC. After helping with the integration, Axel headed off for a three-year sailing tour of half the planet where he photographed undersea wildlife. Following this, he invested in a Danish WFM SaaS vendor and worked as a regional director for the world's leading WFM vendor, Kronos.

Axel also owns a German franchise of Executives Online, offering a broad range of interim management services and project managers. Axel joined Hampleton as a European director and covers all its sectors with particular attention to information management, enterprise applications, including time and attendance (T&A), WFM, and logistics and vertical applications. Axel began his career by applying his management education to a family-operated automobile distributorship, moving on to a sales position at a data-processing company, and shortly thereafter co-founded his first software company devoted to the sales of software for professional craftsmen.