Tech Trends 2020 in M&A: Looking Back to See the Way Forward

Eye-wateringly large deals in a market downturn and a shift from public to private funding – it’s been a year of contradictions and transformations in the global technology mergers and acquisitions (M&A) market.

Anton Røthe, Vice President at Hampleton Partners, looks back over the trends that most impacted the M&A market in 2019, and takes stock of what these might say about 2020.

Return of the NASDAQ disconnect

After a record-breaking 2018, the global technology M&A market is expected to end 2019 with a fizzle rather than a bang.

Global market insecurities, including trade wars between the US and China, uncertainties over Brexit, tensions in Iran, and political unrest in Hong Kong, have all played a hand in the pullback.

The team at Hampleton Partners highlights that the slow down sees the market once again become disconnected from the NASDAQ, which has consistently broken new records, despite corporate and consumer earnings remaining flat.

“In our 2018 market report, we noted that the two had become disconnected in late 2016, and that trend continued throughout 2017. We predicted this could be a sign of overheating in the cyclical M&A market.

“But instead of a market correction in 2018, tech M&A turned around completely, marking a record year in the value of disclosed deals.”

This surprise has not continued into 2019, however, and the market is expected to finish the year at 2016 levels of deal numbers.

The trading of public stock has become crucial for cash-hungry tech companies, but 2019 has been a year of IPO underachievement.

WeWork failed to float in September, Peloton closed its first day 11 per cent down, and both Uber and Lyft are still trading well below their IPO levels months after going public.

Outside of the tech space, by contrast, bids for oil company Saudi Aramco’s planned IPO attracted almost £30 billion of bids this month – equivalent to more than twice the number of shares on offer.

Rather than IPOs, it is private equity (PE) that has continued to be a strong driver of tech M&A in 2019.

Røthe continued: “2018 and 2019 have been record years of activity by PE funds and their portfolio companies.

“More than 30 per cent of all M&A is now completed with a PE as a backer on the acquirer side, compared to 15 per cent just three years ago. Of course, it’s natural to see the share grow over time as PE funds continue to buy brands and build portfolios, but it is rare to see such a marked increase.

“It’s worth noting the caveat,” he added, “that from a value perspective PE funds accounted for 20 per cent of all M&A, a figure that has been stable since 2011.” 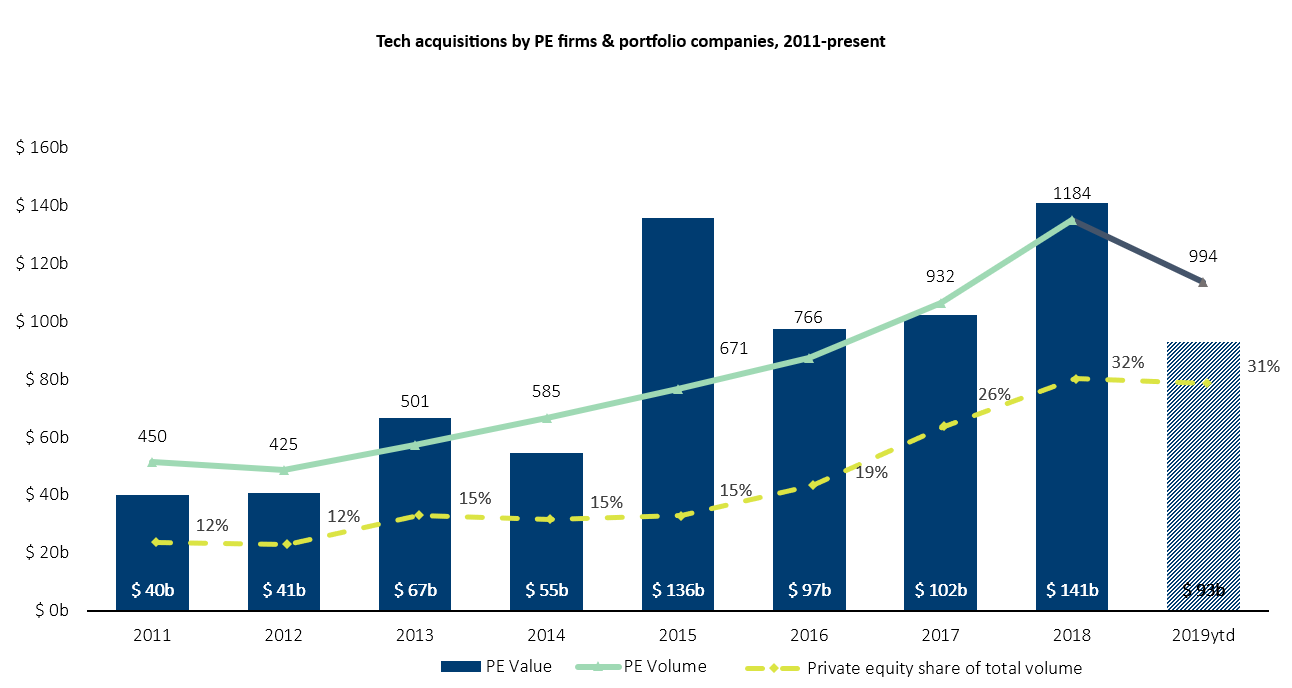 Despite a fall in overall disclosed volume, 2019 has been a year of record-breaking individual deals in the software as a service (SaaS) space.

The year started with Ultimate Software’s announcement that it was going from public to private under an $11 billion contract with leading PE firm, Hellman & Friedman. The deal, which saw shareholders receive $331.50 per share, valued the company at 9.9x sales and 89.6x EV/EBITA.

In March, Fidelity National Information Services agreed to buy payment processor Worldpay for about $35.5 billion – a price that equated to 10.9x sales and 16.9x EV/EBITA.

It didn’t stop there. Fiserv completed its acquisition of First Data Corporation in July, paying $22billion or 4x sales and 13.3x EV/EBITDA, and the following month saw Salesforce buy Seattle’s Tableau Software for $15.5 billion, or 12.6x sales, in its biggest acquisition yet.

Crystal ball: Looking ahead to Tech M&A in 2020

Looking ahead, we at Hampleton Partners see several trends we think will impact on the tech M&A market into 2020 and beyond.

As technology permeates every industry vertical, we expect deal volumes to remain resilient despite the market turndown. Valuations, however, which are more dependent on supply and demand and general market conditions, may start to come down in the face of continuing global uncertainty.

With regard to valuations, we expect buyers and investors to become increasingly wary of overenthusiastic valuations made in public markets, and ultimately transfer this wariness to the private M&A space. Also, many companies are trying to capitalise on high valuations and kickstarting M&A processes. This is creating a higher supply of assets for sale in the market, and, in the long run, will bring valuations down.

PE funds that have been keeping their powder dry up until now have already started to bid for risky assets at high valuations. They are driven by a need to generate returns, but this strategy will be heavily tested in the context of a market downturn.

It’s also worth noting that public markets have, over the last six months or so, been driven by US interest rates and stimuli, rather than underlying earnings growth. This contributes to the possibility of them returning to a more normal level in 2020.

Are you considering exit or fundraise planning for 2020 and are looking for advisory services?

Contact Hampleton Partners for a confidential conversation regarding any of your M&A or corporate finance needs with one of our directors or sector principals: https://www.hampletonpartners.com/contact/. 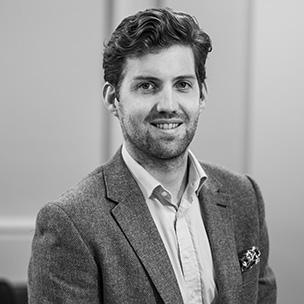 Prior to joining Hampleton, Anton completed an MSc in Corporate Finance at Cass Business School in London, as well as two years of professional experience with Excel modelling, data analysis, FX spot trading, and project management at Loomis FX in Oslo.