The car industry is in a state of flux, as manufacturers and tech innovators clamber to solve the clean transport conundrum – but ‘method of propulsion’ is not the only part of the sector undergoing transformation.

As our latest autotech M&A report shows, automotive original equipment manufacturers (OEM) are increasingly taking control of their own marketing activities. So what does this move tell us about the changing face of sales and how legacy brands are positioning themselves for future success?

“2019 started with Opel turning a profit for the first time in 20 years, saw the surprise unveiling and subsequent window destruction of Tesla’s truck straight out of Tron, and ended with the former Renault-Nissan chief escaping Japan in a cello case." 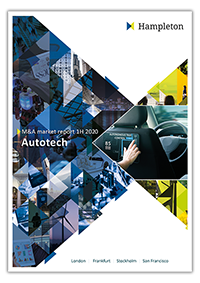 Social selling and a new generation of car buyers

Over the last decade or so, marketing has changed beyond all recognition and digital ad spend has overtaken that on more traditional methods, such as television and print media.

Part of this shift, which has been driven by the changing way in which we all consume content, has been the emergence of influencer marketing. The meteoric rise of brand partnerships and increasing value of Instagram ‘likes’ has taken the old advertising adage of “people don’t buy products, they buy people” to new extremes.

Survey after survey has reported that millennials, or those born between 1980/1 and 1996/7, tend to mistrust big, faceless brands.

Instead, this prime target audience says they make their purchasing decisions based on relationships, trust and common ideals and values – ideals that often include addressing climate change.

For the most part, motor sales have not kept up with this brave new world. While OEM’s produce top level, aspirational, often epic, multi-media campaigns, much of the work on the ground is conducted by local dealerships through traditional channels.

But times are changing.

As our automotive M&A report shows, there is a growing trend among OEMs to take a firmer grasp of their sales and marketing activities.

In 2017, Mercedes-Benz acquired the digital agency Cinte as part of its strategy to provide networked mobility services. And in February of last year, Toyota announced that it was bringing its marketing in-house to “create channel-specific content” and “very personalized messages”.

At the beginning of 2020, Volkswagen (VW) acquired all outstanding shares in digital marketing and engineering agency diconium, having first bought 49 per cent of the company in November 2018. The German agency will fit into VW’s Car.Software division, where it will develop its global online sales platform.

As for Bright Box, the connected car platform, which Hampleton Partners advised on its sale to Zurich Insurance, its Remoto app is packed with features to help OEMs and motor dealers improve efficiency and build business, helping them make sales, manage maintenance and strengthen their direct relationship with their customers.

Such decisions demonstrate that the industry is not only undergoing a massive transformation in terms of the way it designs its products, but also in terms of how it interacts with its customers.

A new model of success for automotive marketing

Autotech heavyweight Tesla, which announced a move to online only sales last year, has demonstrated the power of building a brand that resonates with people.

The company, which relies heavily on its eco-credentials and social media presence, has taken a reported 250,000 pre-orders for its Cybertruck, which isn’t due to go into production until late 2021.

The futuristic pickup made headlines when a ‘test of strength’ resulted in a smashed window at its press launch. A video of the mishap, which happened when a metal ball was thrown at the truck’s armoured glass, went viral and stock prices sank. But the power of the brand meant it soon bounced back.

For some legacy brands, a lack of personal connection to their customers means that brushing off bad publicity isn’t so easy.

When VW admitted it had fitted 11m vehicles with equipment designed to fool emissions tests in 2015, for example, it caused uproar among its climate conscious customer base. In the UK, more than 90,000 motorists are currently involved in a class action lawsuit against the company, and the repercussions of the emissions scandal rumble on.

To stay relevant and build bridges, companies such as VW, Mercedes Benz and Toyota are making moves to emulate the likes of Tesla. They understand that success will not rest solely on who has the best driverless car or electric vehicle technology, but who is best able to take their customers on their journey with them and reflect their values, as well as provide attractive, well-priced vehicles.

As our report shows, OEMs are making strides towards a new way of working, suggesting that they are finally catching up with the new normal of trust-based selling.

The car industry, with its starring role in the growing climate change emergency debate, will need that trust and those relationships if it is to survive the digital transformation that lies ahead.

"There is still everything to play for in the global race toward connected and autonomous vehicles."