Cybersecurity and IoT: Protecting the free flow of data in a connected world

As we move towards a world of smart cities, smart roads and smart homes, data is being shared at an unprecedented rate – the future is coming and it’s coming fast.

But as technology gets ever more intelligent, so do the fraudsters intent on profiting from this free flow of increasingly accessible information.

To mark the launch of our 2H 2019 M&A Market Report on Cybersecurity, we look at the possibilities and vulnerabilities of the Internet of Things (IoT), and explore the techniques being deployed to keep data private and consumers safe.

“As the number of devices connected to the internet grows and enterprise IoT networks expand, the number of potential entry points for cyber attackers is increasing exponentially." 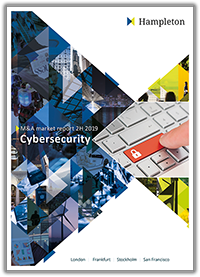 The rise of the smart device

The increasing availability and decreasing cost of broadband internet, combined with the growing number of devices being developed with Wi-Fi capabilities and in-built sensors, are creating a perfect storm for the IoT.

Analysts estimate there will be anything between 26bn and 100bn connected devices in circulation by the end of next year. It means that everything from mobile phones and wearable fitness trackers to jet engines and warehouse machinery can, and will, be able to “talk” to each other by sharing information over the internet.

That’s a lot of connections, a lot of data and, crucially, a lot of entry points, all of which need to be protected from would-be hackers.

And for the companies investing heavily in this brave new world, the reputational and commercial consequences of falling foul of strict privacy laws can be dire.

Protecting against this ubiquitous threat requires an umbrella-level, enterprise-wide strategy and the markets show that industry leaders are doing that by finding new uses for existing technologies.

It’s clear to see what behavioural analytics, which has proved so successful in anticipating and predicting our consumer needs, can offer in terms of data security. With such a wealth of data available, algorithms working within connected systems can be trained to recognise and respond to unusual activities with ease.

Buyers have shown considerable willingness to pay to acquire assets that employ behaviour analytics technology to that end.

In September, the cybersecurity system company Palo Alto Networks paid a reported $75m, or 15x EV/S, for Zingbox. Founded in 2014, the start-up provides AI-based IoT device management and software as a service (SaaS) that analyses IoT endpoints for behavioural anomalies that could signal a threat.

“The proliferation of IoT devices in enterprises has left customers facing an enormous gap in protection against cybersecurity attacks,” said Nikesh Arora, chairman and CEO of Palo Alto Networks, in a statement.

With Zingbox, he went on, the company aims to provide subscription services to behavioural analytics platforms that give “customers the ability to gain control, visibility and security of their connected devices at scale”.

VMware’s landmark acquisition of Carbon Black, which collects and analyses endpoint data to understand attacker behaviour and predict threats, also highlights the importance of behavioural analytics in this space.

The acquisition will see Carbon Black becoming the cornerstone of VMware’s new security unit in an example of what is becoming an industry-wide move to build security into the stack.

“The $2.1bn Carbon Black deal is not only the third largest transaction in the cybersecurity space so far this year, but it’s also VMware’s largest transaction on record, and its first billion-dollar ticket since acquiring AirWatch for $1.5bn in early 2014,” added our report.

The IoT presents us with untold possibilities. Fridges that automatically order milk and industrial machinery that work together to build products in the most economic and ecological way is no longer the stuff of science fiction.

But sophisticated technology invites sophisticated threats, and with such rich and wide-ranging information on offer, the IoT is an attractive target for cybercrime.

Industry leaders understand that overcoming this threat, and realising the opportunities of the connected future, relies upon using all the tools at their disposal to build security into every layer and segment of their business.

Axel Brill, Director, Hampleton Partners, says: “The number of cyberattacks, as well as their complexity, is growing rapidly. Cybersecurity vendors are having to move quickly to keep ahead of malware and hackers."

If you wish to schedule a confidential conversation regarding any of your merger & acquisition or corporate finance needs with Axel Brill or any other director or sector principal, contact us via https://www.hampletonpartners.com/contact/.

“Cyberattacks are some of the most dangerous threats for businesses across all sectors and industries, demanding management time and increased investment in technologies like AI to protect against vulnerabilities. There’s no doubt that AI-focused cybersecurity vendors will be amongst the most sought-after future M&A targets in this sector.”